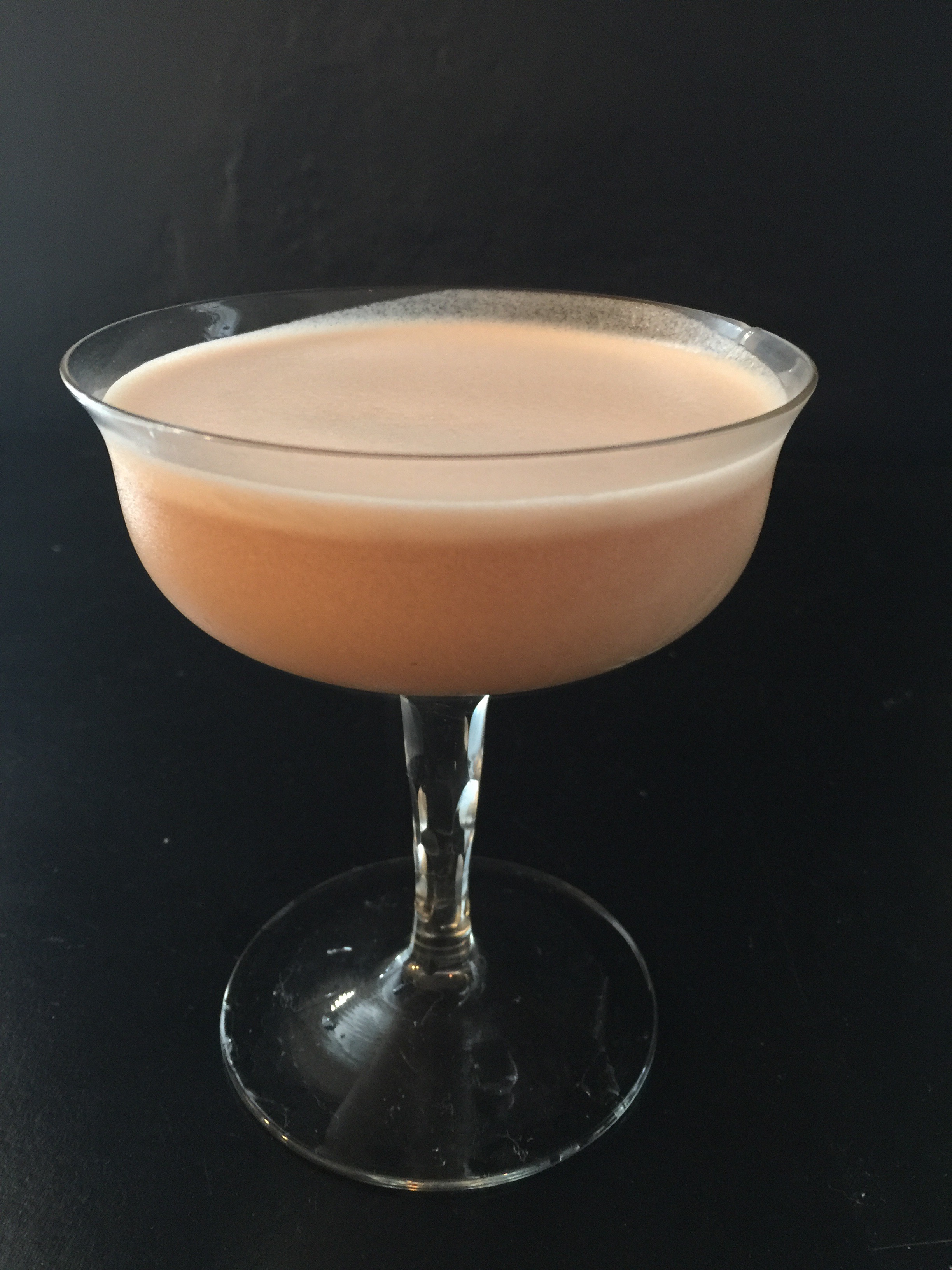 This is called a Flamenco. Sherry, Genever, Orgeat, orange and lemon juice, angostura. I’m not a hero, I just did what anyone would do. Amy loved it.

I found the recipe in my Death & Co book. That’s really the book that got everything started for me. I went to the B&N to find a good book about cocktails and saw it and the Dead Rabbit one, among dozens of others. I got overwhelmed and didn’t buy any.
A couple days later I couldn’t stop thinking about the Death & Co book, so I went back and bought it. I took it home and devoured it. It’s really worth the $40 price tag, and not just for its elegant, velvety hardcover and beautiful full color photos. I like it most for all the background info—how they set up their place, both initially and then what a typical day is like, how they come up with new drinks, how to do a tasting. There’s basic info on the essentials for starting a home bar, how to do everything from shaking/stirring to prepping (and understanding) garnishes, and background on all the spirits and most common liqueurs. I love the sections called “The Regulars,” in which frequent patrons talk about their favorite cocktails and what their experiences have been like there.

And then there are a hundred or so recipes, divided logically by spirit and then shaken or stirred options. They have a few bonus sections on variations for the most classic drinks.

I was intimidated by the book at first because I figured it would be hard to track down the bottles, or they’d be really expensive. And I have had to splurge on things like absinthe and Nikka whiskey (getting married this summer made it easy to rationalize that), but one of the things I’ve learned from the book is that it’s not necessary to buy the most expensive base spirits. The most expensive thing I’ve bought so far (aside from the $70 Japanese whiskey) (so worth it) (and besides, Amy and I did lay out that much for single malts, blindly, from time to time) was a $45 bottle of Herbsaint, and I’ll have that forever. The whiskeys they recommend, Rittenhouse Rye and Buffalo Trace bourbon are both cheaper than Bulleit, which is what we used to buy. In some ways, I’m SAVING money.

I’ve noticed that I’ll see a bottle listed in a ton of recipes, like Pimento dram, so I’ll track it down. Then I don’t see it anymore. I think this is because the whole cocktail world is so new to me and so broad.

The amontillado Sherry, for another example, and orgeat, which I made at home. It’s so delicious. A revelation. And then it took me a while to find Lustau Sherry (at Your Dekalb Farmers’ Market, $19)—was I ever bummed to discover I don’t love it. I think I’m allergic to fortified wines?

Then I saw this recipe for the Flamenco. It’s in the “classic and vintage” section of the D&C book, but a quick google search doesn’t turn up any history for it. It does show a lot of different specs, none of which had Genever or orgeat.

Anyway, I made it and before I handed it over to Amy I tried it. My first sip hit me hard with the Sherry, but a couple follow ups were really creamy and layered with flavor. Amy said it’s one to put in the repertory. I can’t wait.